Bald men are not an uncommon sight nowadays, with all men losing hair progressively as they age. Some may be lucky and only lose an amount that is barely noticeable, while unfortunate guys may suffer severe hair loss.

There are three main areas of the scalp that loses hair during male pattern baldness, which are the temple, crown and mid-frontal scalp.

The most common form of hair loss among Asian men is general hair thinning over the mid-frontal scalp, and this tends to be the case for female pattern hair loss as well. But is there anything wrong with being bald? In fact, do some women tend to fancy bald men? According to a study published by scholars at Wharton, University of Pennsylvania, this might very well be the case!

Researchers on the study asked focus groups made up of both genders to rate photos of men according to their attractiveness, with bald men topping the list in all three categories! The main theory derived from this experiment was that men that have a completely shaved scalp appeared to look more dominant than those with thick manes of hair.

Having an aura of dominance meant that these individuals were perceived to perform better economically in terms of negotiations, which should certainly be a boost to many in the workplace! However, the downside of maintaining a bald appearance also meant that the focus groups found them to look about four years older or so.

In Asia, men are losing their hair at a faster rate than before. A survey taken by the Tsinghua University in Beijing found that close to 60% of participants were suffering from some form of hair loss. As a matter of fact, these men were losing hair at an earlier age than ever before, with hair falling out at the age of 21-22, and becoming painfully obvious by 24-25.

Perception of Hair Loss In Asia

Baldness is typically not considered an attractive trait among Asian men; a survey was conducted by a Japanese media outlet with results showing that respondents perceived western men as attractive, but Asian men as ugly or even perverse if they had no hair! Although some men may not really care or bother that they are going bald, it can cause severe emotional stress to some others. In serious cases, some men may even fall into depression due to the perceived negativity of balding or going bald completely.

Men tend to shave their heads fully because they are going bald and do not want to have half a head of hair, but what options are available for those seeking to restore their glorious manes? Stem cell hair treatments such as stem cell hair regrowth and stem cell therapy are potential procedures that could fit the bill. 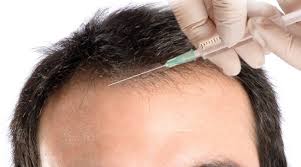 Hair follicles will be harvested from other healthy hair areas on your scalp, before being placed in a special machine to filter out concentrated stem cells. This is then injected into the desired area of treatment to kick start the stem cell hair regrowth process. Stem cell therapy will only harvest a small number of hair follicles, which will not be noticeable. You will see that results are noticeable even within the first month of treatment, but it is advisable to undergo multiple sessions for best results.

Our team of highly professional and experienced aesthetic doctors will strive to make the stem cell hair regrowth treatment as comfortable as possible for you. They will also share their tips and advice with you during the consultation and after stem cell hair treatment in order to ensure that you fully understand what you will be dealing with. This will also help to ensure that the recovery period is as smooth as possible, with no unexpected shocks.

Before & After Stem Cell Hair Treatment

At Premier Clinic, your privacy is assured and all your details will remain confidential. If you would like to know more about stem cell hair regrowth, stem cell therapy, or other hair loss treatments available, please do not hesitate to give us a call at 010-662-1332 to schedule a consultation session. Alternatively, you may email us at contactus@premier-clinic.com and we will get back to you as soon as we can.

Have Questions? Call/ Whatsapp Us Now

Bangsar BranchFind us on Google Maps